For the first time in my writing career, I had to step into a time machine in order to write my next novel, The Sirena Quest. Let me explain.

Most novels, from those on the bestseller list to the classics, are written in the author’s “now.” In the same way that Gone Girl takes place in Gillian Flynn’s present, Leo Tolstoy’s Anna Karenina and Jane Austen’s Emma take place in fictional worlds that are in chronological sync with their author’s world. In other words, when Herman Melville decided to write Moby Dick, he didn’t need to research the whaling industry during the two decades before the Civil War to avoid making any anachronistic errors. That’s because he wrote the novel during those same decades. So, too, the  streets, cars, typewriters, and telephones that Philip Marlowe used in the Los Angeles of the 1930s in The Big Sleep are the same streets, cars, typewriters, and telephones that Raymond Chandler used while he wrote that novel in Los Angeles in the 1930s.

But many wonderful writers have elected to set their novels in an earlier era. Alan Furst, for example, is the master of the historical spy novel. Most of his books are set in Europe just prior to or during World War II. So, too, in 1989, Ken Follett, whose earlier books established him as a bestselling author of international thrillers, made a radical shift back in time to the 12th century with Pillars of the Earth, the first novel in his trilogy set in medieveal England.

Not keen on the 12th century or pre-WWII Europe? No problem. Name your era, pick your genre, and you’ll be amazed at the offerings. Have a yen for mysteries and suspense set in ancient Rome? Here you go. How about medieval romance novels? Step right up.  And when you finish, say, Robert Harris’ An Officer and a Spy, pause to reflect on the amount of historical research into the Dreyfus Affair that had to precede the moment when Harris typed CHAPTER 1 at the top of that first page.

That’s because, among other things, when you set your fictional world in an earlier era, you need to guard against anachronisms. For example, Shakespeare committed one such error in Julius Caesar when he had Cassius announce that “The clock has struck three.” The problem? There were no such mechanical clocks in ancient Rome. Another example? In the movie Titanic, the character Jack mentions his ice-fishing on Lake Wissota near Chippewa Falls, Wisconsin. Unbeknownst to the screenwriters, that particular lake is a man-made reservoir constructed five years after the sinking of the Titanic. You can find other chronological flubs here.

Ironically, as I discovered in writing The Sirena Quest, keeping the smaller details accurate is even trickier when your novel takes place sometime in the past several decades. That’s because, in addition to all the cultural changes and new events that will impact your characters, you have to pin down the then-current technologies. Set your novel in, say, a law firm in 1979, and you sure better not put a laptop on your lawyer’s desk or give him access to the Internet. And you best wait a few years more before you have him settle down on his couch at night to watch SportsCenter on ESPN.

As you move forward into the 1980s, the pace of technological change only increases. Think of that iconic shot of Michael Douglas with the gargantuan cell phone in the 1987 movie Wall Street–a technological wonder back then, an object of mockery today. 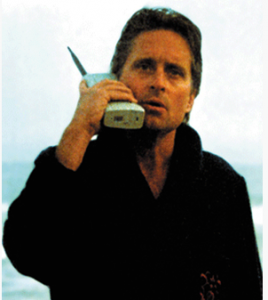 My novel, The Sirena Quest is set in 1994. It features four men who met as college roommates their freshman year, drifted apart after graduation, and are now coming together a week or so before their 20th year college reunion.

Not that long ago, right? You’d be surprised. Though our cell phones had starting shrinking, the flip phone version was still two years away and, even more surprising, Apple would not unveil the iPhone for another 13 years. Facebook was ten years from launch; Twitter twelve years.

In an effort to ground my readers in the world on the day the novel opens, I included the following passage in the first chapter:

June 6, 1994—a date hitherto known, if at all, as a slow news day following a busy month. During May of 1994, Jacqueline Kennedy Onassis died of cancer, Nelson Mandela won South Africa’s first democratic elections, Michael Jordan swapped his Air Jordans for baseball spikes, and President Bill Clinton beamed as Israeli Prime Minister Yitzhak Rabin and PLO leader Yasser Arafat signed what the pundits declared “an historic accord” on Palestinian autonomy.

June sixth. No big headlines. Not much on the sports page. Nothing special at the movies, either. Release dates for Forest Gump and Pulp Fiction are still weeks away. Ace of Base’s “The Sign” sits atop the rock chart.

The Mysterious Case of the Monkey Selfie

The Coolest Book of All Time