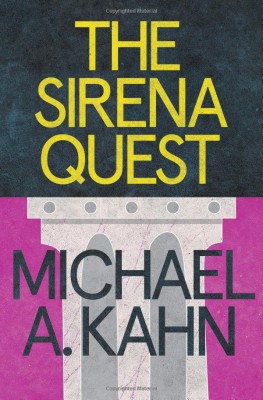 The New York Times Sunday Magazine piece famously opened: “She has pouting lips and high round breasts. Thousands of men have dreamt of her. Hundreds have chased after her. Two have died in pursuit. Her name is Sirena, she weighs 193 pounds, and she vanished in 1959. Without a trace.”

Barrett College’s legendary Greco-Roman sculpture’s fate was still a hot topic in 1970 when four roommates began their freshman year at the New England school. They’ve gone their separate ways for years. But as the 1994 commencement approaches, they are about to reunite to meet a challenge thrown down by a Class of ’59 hedge-fund billionaire. He has pledged a $25 million endowment plus a $3 million purse to her finder(s) if Sirena is restored to Barrett by June 17th, the date of his 35th reunion, the college’s sesquicentennial celebration—and our foursome’s 20th class reunion.
Although they are not alone in their pursuit—groups of alumni, including a pair of aggressive and highly-financed classmates, are running down leads across the world—St. Louis lawyer Lou Solomon and his crew come upon an obscure but intriguing clue. It leads them to Chicago where a young lawyer called Rachel Gold may hold key information. As the men race to crack the Sirena puzzle, their quest will transform their lives in unexpected ways.

Look Inside
Disclosure of Material Connection: Some of the links in the page above are "affiliate links." This means if you click on the link and purchase the item, I will receive an affiliate commission. I am disclosing this in accordance with the Federal Trade Commission's 16 CFR, Part 255: "Guides Concerning the Use of Endorsements and Testimonials in Advertising."