It’s simple Hollywood math: the most popular novel of the year–or even of the decade–has been read by just a fraction of the number of people who’ve seen the movie version of the novel. The subject of my last post was Mario Puzo’s novel, The Godfather, and the Francis Ford Coppola film adaptation of the novel. As stated in that post, Puzo’s novel stands as one of the most popular American novels of the century, having sold more than 20 million copies since its publication in 1969.

Which brings me to Shoeless Joe, the 1982 magic realist novel by W.P. Kinsella that was made into the 1989 motion picture Field of Dreams. Although I could not find sales numbers for the novel or viewer stats for the movie, it’s safe to assume that the ratio of movie viewers to book readers is, at the very least, twice that for The Godfather. All of which means that far more of you have seen the movie than read the book.

In the novel and the movie, Ray travels to New England, finds the author, takes him to a Red Sox game in Fenway Park, and then brings him back to Iowa, where he has built a baseball field in his cornfield in response to a mysterious godlike voice that told him, “If you build it, he will come.”

The “he” is Shoeless Joe Jackson, the legendary Chicago White Sox ballplayer who was one of eight men–the Black Sox–banned from baseball after allegedly fixing the 1919 World Series. Jackson was the hero of Ray’s father Johnny. Johnny Kinsella had been a minor league catcher who told his son the Black Sox tale the way other fathers told their children fairy tales. Shoeless Joe and Ray’s father have been dead for decades.

If you haven’t read the book or if you haven’t seen the movie, prepare yourself for a magical trip to an enchanted baseball field in the middle of an Iowa cornfield where long-dead ballplayers return to life, stepping through the cornstalks that ring the outfield and onto the field to play baseball. At the end of each day, the players head back into the cornstalks and disappear.

The novel ends with J.D. Salinger–known as Jerry to Ray–joining Shoeless Joe and the other ballplayers as they head back into the cornstalks. “Take care of my friend,” Ray calls to Shoeless Joe, who salutes and claps a hand on Salinger’s shoulder. As the ballplayers disappear, Ray walks back to the farmhouse with his wife Annie. The novel ends:

On the porch, we turn to look at the silent, satiny green of the field. I press the switch and, like a candle going out, the scar of light disappears. Above the farm, a moon bright as butter silvers the night as Annie holds the door open for me.

As beautiful and poignant as that ending is, it can’t compare to the ending of the movie. In the final scene, just before the ballplayers head off toward the cornstalks, Shoeless Joe tells Ray, “If you build it, HE will come”, and glances toward a player near home plate in catcher’s equipment. The player removes his mask, and Ray recognizes his father Johnny, magically returned as a young man. At his wife’s urging, Ray introduces Johnny to his granddaughter Karin, catching himself before telling Karin who the man is, simply introducing him as “John.” And then, well, here is the rest of that final scene. Before you click on the link, I’d suggest getting yourself a Kleenex. 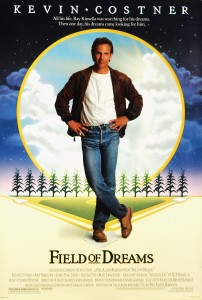 Some More Thoughts on Hollywood and the Novel