I have a chronic condition that many of you share. What is it? A  nagging curiosity about the origins of certain words and expressions. 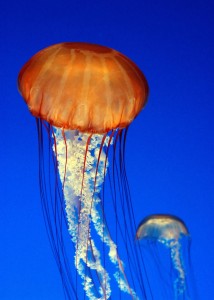 The most recent flare-up occurred last week on a family vacation along the Riviera Maya south of Cancun, Mexico. As I walked with my grandson Oliver down to the beach, we passed a sign featuring an image of a jellyfish with a notice in English and Spanish. The English version read: “This is jellyfish season.” The Spanish version read: “Esta es la temporada de medusas.”

A few days later, I was reading an article about a recent movie that had become, in the writer’s words, a “blockbuster.” Blockbuster? I had seen or used that word countless times to describe a popular movie or book without ever considering its origins. Indeed, I’d rented videos for more than a decade from Blockbuster Video without ever once wondering, Why ‘blockbuster”?

So I turned to the dictionary, where I learned that the term “blockbuster,” coined during World War II, referred to a multi-ton aerial bomb containing high explosives for use as a large-scale demolition device, i.e., a bomb whose explosive power could “bust” an entire city “block.” So how did it evolve from a powerfully destructive bomb to, according to the dictionary, “a motion picture or novel, especially one lavishly produced, that has or is expected to have wide popular appeal or financial success”?

I will save you a trip down that etymological “rabbit hole” (thank you, Alice in Wonderland) and tell you that I found two explanations for the evolution of the term from destructive bomb to hit movie or book. One explanation, cited by several (including the Oxford English Dictionary) focuses on the fact that a blockbuster bomb makes an enormous hit on its target. Thus a movie or book that is a big hit is a blockbuster. The other explanation, which seems a little more strained, traces the origin to a popular movie or play that was so successful that competing theaters on the block are “busted” and driven out of business. 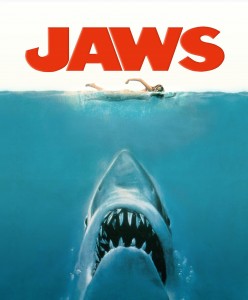 Regardless of the correct pathway from destructive bomb to a super-grossing motion picture, the language gurus point to Steven Spielberg’s 1975 movie Jaws as the occasion when “usage of ‘blockbuster’ for films coalesced” and “became perceived as something new: a cultural phenomenon, a fast-paced exciting entertainment, almost a genre. Audiences interacted with such films, talked about them afterwards, and went back to see them again just for the thrill.”

Another symptom of this language affliction is that once you start down that rabbit hole, you can’t stop. Notice use of the word “bomb” above in describing a “blockbuster.” And thus my next question. If blockbuster somehow evolved from a bomb into a big hit movie, how did “bomb” evolve from a big hit to a dismal failure, namely, a dud? Or, even odder, how did the term for a destructive explosive device evolve into the expression “the bomb,” which is a term to describe something totally cool. Here is one explanation I found:

People have been dropping the word bomb in many different ways for years, and it’s easy to see why: because it’s such a short and evocative word, it’s perfect for slang. At times bomb has meant a large sum of money, a marijuana cigarette, a nice car, and an old beat up car. Americans traveling in England might be confused, because in the UK, a performance that is a bomb is a tremendous success, whereas a performance in the US that bombed is a failure. Both meanings play off the idea of explosive impact, but one focuses on the positive (it was exciting!) and the other the negative (it was disastrous!). By the 1990s in the US, the British slang had rubbed off on speakers of American English, and for a time anything cool could be called “the bomb.”

And while we’re on the subject of bombs, how did the noun “bombshell” evolve from an explosive device to a shocking development to an extremely attractive woman? As the etymologists explain, all three meanings include the notion of a head-turning, eyes-wide moment.

Which moves us on to “rubber-necking,” which edges us close to a “red herring,” and which promises us no exit from this particular rabbit hole. But rather than “tilt at windmills” or “burn any more bridges,” it’s time we “talk turkey.” But first let me grab a “brewski” or two. But don’t worry. I’m not a “navel gazer,” although I like my maritime slang. So even if you join me at a “kegger,” I promise I won’t get “three sheets to the wind.” And if things get “dicey,” we can always “cut and run.”

Dylan, Hemingway, and a Peek Behind the Curtain