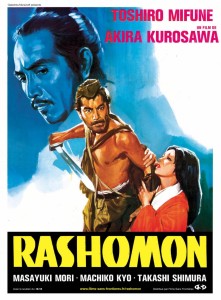 In my recent musings on unreliable narrators in literature and the law, I kept coming across the term “the Rashomon Effect.” Indeed, Google that term and you will get links to fascinating essays in a variety of fields ranging from psychology to anthropology to sociology to historical interpretations to the law.

Stated simply, the “Rashomon effect” is the effect that our subjective perceptions have on our memories of events. The result is that two or more observers of the same event will describe substantially different but equally plausible accounts of the event. As neurological science has demonstrated, we are all subject to the Rashomon effect. We are all unreliable narrators.

So where did that that term come from? I’m embarrassed to say that I didn’t know it’s the title of an acclaimed motion picture. As Roger Ebert wrote:

“Rashomon (1950) struck the world of film like a thunderbolt. Directed by Kurosawa in the early years of his career, before he was hailed as a grandmaster, it was made reluctantly by a minor Japanese studio, and the studio head so disliked it that he removed his name from the credits. Then it won the Golden Lion at the Venice Film Festival, effectively opening the world of Japanese cinema to the West. It won the Academy Award as best foreign film. It set box office records for a subtitled film. Its very title has entered the English language, because, like Catch-22, it expresses something for which there is no better substitute.”

(1995)–Rashomon is a virtual tour de force on the subject. Set in 12th century Japan, the central event is the murder of a samurai. That murder occurs before the movie opens. Three of the witnesses at the trial are supposedly the only eyewitnesses. They are: a notorious bandit, who confesses to murdering the samurai and raping his wife; the wife of the samurai; and the dead samurai himself, who testifies through a medium. Their stories all have the same basic structure: the bandit kidnapped the samurai,  tied him to a tree in the woods, and raped the wife. But each story contradicts the others as to the actual murder and the motivation. And then a fourth witness–the woodcutter who had discovered the dead man in the woods–reveals that he knew more than he testified to at trial.

In short, the film gives us four equally plausible versions of the same grisly murder. Which version, if any, is the real one?

Watch the movie. See if you can figure out the answer.

The Unreliable Narrator and the Law

Mysteries and the Unreliable Narrator