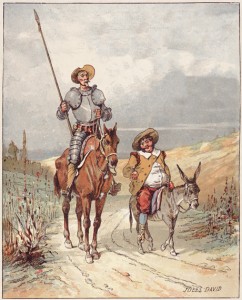 Yes, I know. A curious title. Bear with me.

First, the sex. Many years ago, I read a magazine piece by a literary figure who’d come of age in the Greenwich Village of the 1920s. Among her fond memories of that era, she wrote, was the pride that she and her friends took in their mastery of the art of fellatio. I sat there stunned, trying to grasp the fact that knowledge of oral sex had preceded the “sexual revolution” of the 1960s. And then I had one of those Homer Simpson “Doh!” moments as I realized that we humans have looked pretty much the same for nearly a million years, and thus at some moment eons before Woodstock some man and some woman checked one another out, grinned, and, well, you get the point.

Which brings me to metafiction, that self-conscious style of fiction that takes as its subject fictional writing and its conventions. Examples include a story about a writer creating a story, such as Paul Auster’s 2003 novel Oracle Night, and a story about a reader reading a story, such as Italo Calvino’s 1979 novel If on a winter’s night a traveler (which opens with those very words). As with oral sex, I had assumed that metafiction–so often coupled with the term “postmodernist”–was invented in the 1960s.

And then I read Don Quixote. Published more than four hundred years ago, this novel occupies the #1 slot in The Guardian’s rankings of the 100 Greatest Novels of All Time. The basic story line: Alonso Quijano, an aging landowner from La Mancha, has been driven insane by his obsessive reading of the tales of chivalry in his library. Resolving to restore dignity to the lost profession of knight-errantry, he dons a rusted suit of armor, renames himself “Don Quixote de la Mancha,” recruits a simple farmer named Sancho Panza as his squire, mounts his spavined horse Rocinante, and sets out in a quest for glory, which begins infamously with his attack on a windmill that he believes is an evil giant.

But what most surprised me about this remarkable novel is the way it makes postmodernist metafictions seem almost quaint, beginning with the Prologue. This is where Cervantes confesses he is not the father of story but just the stepfather. The “real” author of Don Quixote, he explains, is an Arab, Cide Hamid Benengeli, whose chronicle Cervantes has had translated into Spanish.

This “stepfather” role gets reinforced when an exciting battle scene in Chapter 8 ends abruptly with Cervantes explaining that Benengeli could find nothing further about the event and thus “left the battle suspended in midair.” Chapter 9 begins with Cervantes telling us that in a marketplace in Toledo he recently bought some old notebooks written in Arabic. He found a Moor to translate them and discovered to his joy that they included the rest of the battle scene from Chapter 8, which then becomes the rest of Chapter 9.

Cervantes himself makes a quirky “appearance” in another chapter, where the village priest and barber, convinced that the only way to restore Quixote’s sanity is to burn all of the tales of chivalry in his library, start reviewing his books to decide which ones to burn. In the process, they comes across a novel by Cervantes. The priest explains that Cervantes’ work has clever ideas but never fulfills its potential. He hangs onto the novel in the hope that the sequel Cervantes has promised will eventually be published.

These examples from Part 1 of the novel are nothing compared to what happens in Part 2, published 10 years later and shortly after publication of a fraudulent version. Every fictional character in Part 2 has already read Part 1. Thus the people we meet in Part 2 are not only familiar with the history of Don Quixote and Sancho Panza but have also read the pirated version. When strangers encounter Quixote and Panza, they already know all about them–and this knowledge triggers much craziness and practical jokes. 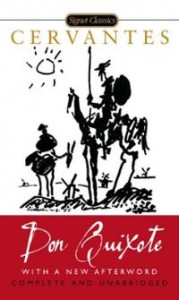 In short, the metafiction that is Don Quixote preceded the “invention” of postmodern metafiction by nearly four centuries. Which, at last, brings me to Ecclesiastes, who would have rolled his eyes at my surprise at learning the deep histories of what I believed were inventions of the 1960s. As he wrote more than 2,400 years ago: “What has been will be again, what has been done will be done again; there is nothing new under the sun.”

Or as a humbled Shakespeare wrote in his Sonnet 59:

If there be nothing new, but that which is

Hath been before, how are our brains beguiled,

Which, laboring for invention, bear amiss

The second burden of a former child.

The Final Mystery for Literary Snobs: A Novel That Once Was Just a “Pulp Crime Mystery”